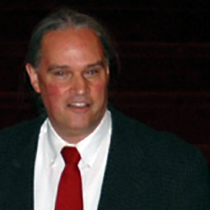 DAVID SIMPSON
David Simpson is a musician, poet, and actor. He earned a Master of Music degree in organ performance from Westminster Choir College, before traveling to Paris, France for a year of private study with the world-renowned organist André Marchal, who was also blind. He has given organ recitals, most notably at the Fifth Avenue Presbyterian Church and St. Thomas Episcopal Church in New York City. Singing with the Westminster Symphonic Choir and the Mendelssohn Club of Philadelphia, he has performed with numerous symphony orchestras, including The Boston, Pittsburgh, and Atlanta symphonies, as well as The New York Philharmonic and the Philadelphia Orchestra.

He also holds a Master of Fine Arts in Creative Writing from New York University. Mr. Simpson’s poetry has appeared in numerous journals including Alaska Quarterly Review, River Styx, The Cortland Review, Verse Daily, and La Petite Zine. In 2007, he and his twin brother, Dan, released a CD of their poetry entitled Audio Chapbook. Jointly, Dave and Dan have read at venues which include The Free Library of Philadelphia, Philadelphia’s First-Person Festival, WXPN World Café, and on Whyy’s Radio Times with Marty Moss Coane. Dave recently made his acting debut, performing as the character Dan, in the Amaryllis Theatre production of “Blood Guilty,” by the Irish playwright Antoine O Flatharta.

In 2005, he was first runner-up in the Fraser Poetry Competition; in 2006, he received honorable mention in the Passager poetry contest and a Pushcart nomination from the Schuylkill Valley Journal. He was the 2007 Montgomery County Poet Laureate and the recipient of the 2007 Ted Kooser fellowship, awarded by the Nebraska Summer Writers Conference. Within the past two years, he has received fellowships from the Ragdale Foundation, The Hambidge Foundation for Creative Arts and Sciences, and the Independence Foundation.

Dan and Dave began playing four-hand piano and singing in early childhood, but their performance of popular music together really took off in high school. Even though they attended different colleges, they got together frequently to play in coffee houses during the early Seventies. These days, they enjoy performing a show for schools, libraries, churches and conferences which combines music and poetry and tells the story of their development as artists.

David lives in Glenside, Pennsylvania, where he is working on a one-person show. His first book of poems, The Way Love Comes to Me, is in search of a publisher.