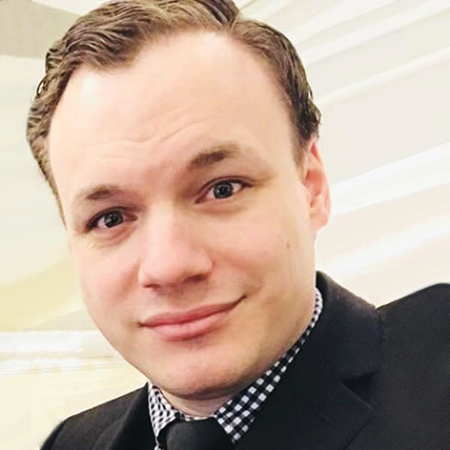 Chad Frame’s work has appeared in decomP, Rust+Moth, Menacing Hedge, Mobius: The Journal of Social Change, and elsewhere. He has been nominated for Best of the Net 2016 and The Best Small Fictions 2017. He earned his MFA at Arcadia University, and feels that waiting ten years to do so after finishing his undergraduate work at Penn State left him better equipped to appreciate it and more experiences to write about.

Chad Frame is a founding member of the No River Twice poetry improv troupe. He is also the poetry editor of Ovunque Siamo: New Italian-American Writing and co-founder of the Caesura Poetry Festival. Chad has been published in various journals, including decomP, Barrelhouse, Rust+Moth, and Mobius: The Journal of Social Change, as well as featured on the radio program The Poet and the Poem hosted by Grace Cavalieri in association with the Library of Congress.

What free time he manages to have is often spent reading voraciously, playing obscure board or card games, or fencing foil and historical rapier. He lives in Lansdale with a bobtailed Maine Coon named Jabberwocky among precarious piles of books.

“These poems are both daring and precisely made. There is powerful longing here and, without a carefully measured restraint, this emotive force could derail the poems, but they remain richly evocative and ask for the reader to be present in numerous and surprising ways.”